The Sea of Cortez

The Aquarium of the World

The Sea of Cortez, also known as the Gulf of California, is a 160,000km2 body of water lying between the Baja California Peninsula and the states of Sonora and Sinaloa on the Mexican mainland. With only 5 million years of age, it is thought to be the youngest sea on Earth. As severe volcanic activity and tectonic plate movements created and tore away the Baja Peninsula from Mexico, the Pacific Ocean rushed in to fill what became the Sea of Cortez. Great currents and severe changes in the depth contour make this Sea one of the richest and naturally diverse of the planet, which is why Jacques Cousteau labelled it the “Aquarium of the World”.

Known for its impressive volcanic coastline, similar to the desert and the rich of its marine environment, the Sea of Cortez is a UNESCO World Heritage site that is home to a third of the mammalian and cetacean species of our oceans , and offers a unique setting to observe wonderful creatures such as Mobula rays, humpback, grey and possibly blue whales and whale sharks. We will do our best to help you spot some!

We do most of our exploration on the Baja side, as this is where we find most of the islands that make up the Gulf Islands National Park, including many species endemic to these islands and the possibility to observe beautiful marine mammals and birds. The scenery is also stunning here, with volcanic remnants covered by millions of years of sedimentation and tectonic action.

The conditions in the Sea of Cortez are otherwise great for sailing, with winds between 10 and 25 knots being common throughout the year. Land and sea breezes play an important role in cruising as well as anchoring, with night winds, especially in the areas affected by “Coromuels” and “Elefantes”, usually blowing from the West. During the winter and spring, a northerly wind is funneled between the mountainous backbone of the peninsula and the Mexican mainland, locally referred to as the “Norte” and which can be quite fierce if caught unprepared. In the following screen from Windy.com, you can get an idea of the current and forecasted wind strength and temperatures for the Sea of Cortez.

Up to date weather of the Sea of Cortez 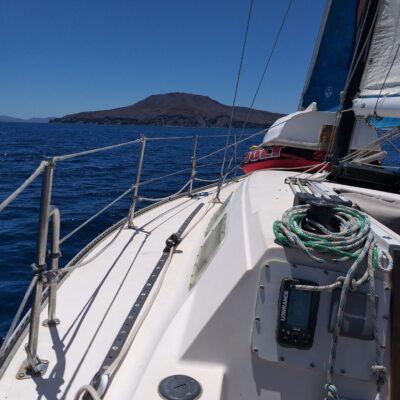 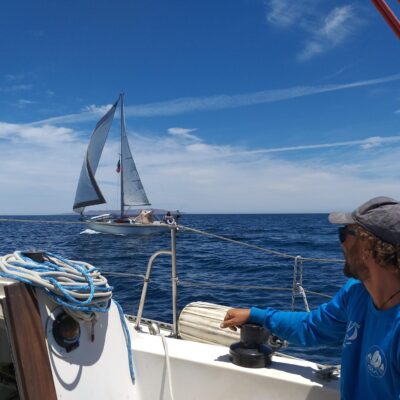 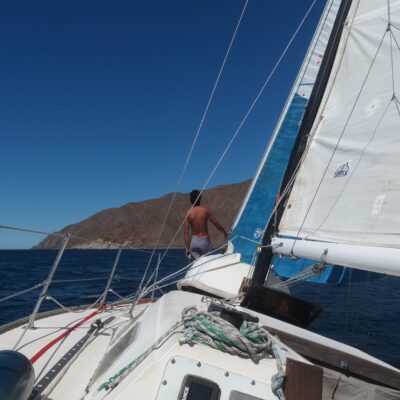 Awesome hosts, great sailing and hiking sessions, breathtaking views, all masterfully combined to create one of the best experiences of my life!

I had the pleasure of spending one month with Sail in Mexico and Captain Roberto in 2019. We sailed from La Cruz up the west coast of Mexico until Mazatlan where we crossed the Sea of Cortez and I ended my voyage in Cabo. Of course many stops were made along the way. A personal highlight was spending my birthday at Isla Isabel swimming in crystal clear waters with only the frigatebirds and blue-footed boobies to keep us company. The crew somehow even managed to surprise me with a cake out in the middle of nowhere! The experience you will have with Sail in Mexico will be one of kind, whether you are looking to gain sailing experience or searching for an adventure or even just going to enjoy some calmness and beautiful scenery. There is something for everyone! Whether you are an experienced ocean crossing sailor or someone who has never been on a boat, you will be in good hands (and company!) with Captain Roberto. He is a competent, safe, attentive sailor with a wealth of knowledge. Trust that this man will guide you well in whatever boating situation you may find yourself in. So go to learn or just go to play dominos, drink micheladas and watch pretty sunsets. The point is go to Sail in Mexico, you won’t be disappointed!

The host is professional and makes you feel so safe!!

I have been sailing my whole life from small daily dinghies to live aboard cruiser, and sailing with Capitan Roberto is one of my best sailing experience. Wherever you are discovering the sailing world for the first time or you are experience sailor wanting to deep in your sailing skills, Roberto has the experience, patience and knowledge to make it a unique experience. Where most sailing charter only allows limited interaction with the actual operation of the boat, Roberto will get you on to the real joy of sailing with a full hands-on experience. Rossa is a light sailboat, fast and highly responsive where the priority has been put to maximize the sailing possibilities.